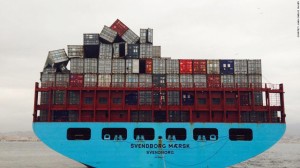 In recent months there has been much in the news about cargo containers lost at sea. In late February, the Svendborg Maersk lost over 500 containers when it encountered hurricane force winds. This was the largest recorded loss of overboard containers in one incident. It is estimated over 10,000 cargo containers are lost every year. While this number is small in comparison to the mega millions of containers shipped each year, we highly recommend ocean marine cargo insurance to our clients.

Ocean Marine cargo insurance policies can be complicated but they are a necessity for international shipments. Let’s start with the basics. Marine cargo insurance covers losses that occur while goods shipped via sea/inland waterways are in transit. At minimum Marine Cargo Insurance insures the owners of cargo for loss of, or damage to, it during a voyage either wholly or partly over water. The cost of coverage varies.

Insurance costs are a function of various factors such as:

Incoterms will determine if the shipper or buyer is responsible for insurance during the transit. Because goods covered by Ocean Marine cargo insurance may travel through many different countries or governmental regions, it is impractical for each state to impose its own special terms or conditions, as this would hamper the free and rapid movement of goods. Because of this, Ocean Marine insurance is usually unregulated by governmental agencies (check with your insurance regulators). Ocean Marine insurance is governed exclusively by the Standard and Special Conditions of the insuring contract, and by the wordings of applicable international treaties such as those from the International Chamber of Commerce known as the Institute Cargo Clauses. The insurance Certificate and its applicable wordings are a Contract.

Ocean Marine Cargo insurance is written on an indemnity basis. The intent of indemnity is to make someone “whole” again by paying actual damages to the cargo, while preventing any gain.

Under the principle of Indemnity, insurance is designed to restore the policyholder to the same financial condition enjoyed prior to a loss, subject to the terms and conditions of the insurance purchased.

Ocean Marine policies are most often written on a “stated value” or “declared value” basis, meaning the insurer will pay actual damages, or the stated value of insurance purchased, subject to the conditions and deductibles of the insurance.

Subrogation applies when a third party caused a loss or was primarily responsible for it through negligence. A loss victim usually has legal recourse against a party at fault. Subrogation transfers this right to the insurer when a loss is paid, but only to the extent of the insurance payment. Failure to protect the Insurer’s Subrogation Rights can adversely affect claims settlement.

Ocean Marine insurance covers shipments while they are under the “Care, Custody, and Control” of the Forwarder while the purchaser of the insurance (Shipper, Consignee or other party) retains an Insurable Interest in the goods covered subject to the Incoterms.

A statement in any Ocean Marine insurance document, whether application, claim, or other communication, submitted by an Insured, whether by the Forwarder or the person insuring the cargo, is warranted to be TRUE IN ALL RESPECTS. IF UNTRUE IN ANY RESPECT, even though the untruth may not have been known to the person giving the warranty, the CONTRACT MAY BE VOIDED whether or not the untruth or inexactness was material to the risk.

The sum of money required to pay for damages or lost property, computed on the basis of replacement value less its depreciation by obsolescence or general wear.

NOTE: Ocean Marine insurance covers the value of the goods for their replacement or declared value or to the limits of the insurance, whichever is less.

It is reasonable and customary in Ocean Marine insurance to insure cargo for CIF+10%. CIF+10% means insuring the shipment for the Cost of the goods, the cost of the Insurance, the cost of the Freight, and an extra 10-pct. of the total value for lost time, paperwork, and trouble.

All Ocean Marine insurance is governed by the sales contract. When ownership of goods changes hands, insurance begins or ends unless prior arrangements have been made with the Insurer. There are 11 widely used and internationally approved Incoterms. Incoterms delineate where responsibilities of Shippers, Sellers, Buyers and Consignees begin and end.

Incoterms wordings are available from the International Chamber of Commerce. An overview is available here.

EXAMPLE: You could ship $5000 worth of waste paper yet be faced with a $150,000 General Average claim for cargo lost by others. ICC Clauses C minimum insurance covers this.

In property insurance, a clause under which the insured shares in losses to the extent that he is underinsured at the time of loss. Ocean Marine shipments are subject to the Co-Insurance Clause.

WHAT COVERAGES DO AND DO NOT COVER:

NOTE: This is a broad and brief overview of types of insurance. Read and understand your coverage benefits and limits. If you have any questions, never hesitate to ask.

NOTE: All coverages described briefly below are subject to the wordings of the insurance contract, the limits of the coverage purchased, and any applicable governing laws or treaties.

OCEAN MARINE Covers cargo while it is under the care, custody and control of the purchaser of the insurance or insured’s designated agent (such as a forwarder) subject to the insuring terms, the Incoterms, and the limits of the contract

IN GENERAL TERMS: ICC Clauses A covers everything except what it specifically excludes, which are losses attributable to “War” or “Strikes.” Thus combining Clauses “A, War & Strikes” with the Standard Conditions of insurance provide what is usually referred to as “All Risks.” ICC Clauses C covers nothing but what is specifically says it covers. Read the precise wordings to be sure of the coverage

In summary, if you import or export please be mindful of the sales terms and Incoterms in use. It’s common for exporters to sell their cargo on a CIF (Cost, Insurance and Freight) basis, so the seller promises to arrange the cargo insurance. If a seller sells goods on an FOB, Ex Works or similar basis, the buyer arranges his own cargo insurance. Not purchasing insurance can be risky, goods are usually not paid for until after delivery. If the goods arrive in a damaged condition, the buyer may refuse to pay for them. If the exporter has not taken out cargo insurance, they will not receive compensation for the damaged goods. Being mindful of the Sales Terms and Incoterms eliminates confusion and may eliminate potential problems in case of a claim. It is important to select the insurance policy that best fits your company’s needs.

If your business imports or exports we recommend cargo insurance. To learn more about available insurance options, and how they may affect your business, please contact us.

About the Author: Darrell Gajadhar