Cargo theft is on the rise and thieves are becoming more sophisticated. Cargo theft can happen at any time to just about any shipment. The National Cargo Security Council (NCSC) estimates that the global financial impact of cargo loss exceeds $50 billion annually. Freight Watch International reports Mexico, Brazil, South Africa, the United States and Russia are the countries most at risk for cargo theft globally. 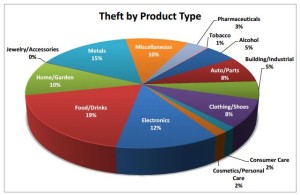 In the United States cargo is stolen three times a day. The most popular commodities are food, metals and electronics. The states with the highest incidents of theft are California, Florida and Texas (Source Freight Watch). Don’t worry – there are ways to prevent cargo theft.  At AirCargo 2014 John Tabor, president of All States Locate, offered these great tips:

Incorporating  these measures into your security cargo program will protect your shipments and lower the risks of theft. Cargo theft is costly and results in supply chain interruptions, increased insurance rates, additional expenses for replacement shipments and lost revenue due to lost business. Inbound Logistics recommends you know your economic consequence of loss. Below are steps and examples to guide you in calculating and determining your Expected Value of Loss (EV).

For example, if you had 100,000 shipments, and 2,300 loads were compromised, this equals a 2.3 percent probability that a load was compromised.

To get a better picture geographically of where your cargo losses are occurring, conduct a regional analysis based on your supply chain routes. In general, shipments through Baltimore, Portland and Canada are safer than product shipped through Miami, Southern California or Mexico.

If your company keeps good records, then you know where your hot spots are and you can run the formula for each trade lane or corridor.

If the typical value of your load is $250,000, and you have a 2.3-percent probability of compromise, then you are losing $5,750 for every load that leaves your dock. If your insurance does not cover this loss, or if you did not make some claims, you will need to add that number into the equation as well. Even if your insurance covers that amount, you still need to figure the other economic repercussions of cargo loss.

Look at your numbers for the following items using the same time period for determining the probability of loss:

Not all will apply, and you may have additional expenditures resulting from cargo crime. You need to add these numbers together, and divide by the number of loads you had in the given time period.

For example, if your additional costs resulting from cargo crime come to $800,000, divide that number by the number of loads (100,000) and you reach $8 as your economic consequence of loss.

Now, we have all of the data to complete the formula. Our example yields the following:

Theoretically, with your Economic Value of Loss at $18.40, you will stay ahead of the game if you spend less than this amount on security for each load. And since that number assumes worse case scenario, a more moderate approach may be adequate.

If you spend an amount close to your prior year’s economic consequences, however—about $8 per load in the above example—you would at least break even, but only if crime levels stayed exactly the same.

Unfortunately, worldwide cargo crime levels multiply each year, so using the prior year’s probability of loss numbers could be misleading because your risk continues to increase. Your probability of loss may have been 2.3 percent last year, but may now be as high as 5.2 percent.

Predicting the coming year’s crime level is difficult, but if you at least gather data from the prior year, and use the EV formula, you’ll have a good base of knowledge. At least you will know your minimum cargo security requirement and this is a good start in keeping your cargo safe.

As always, if you have any questions about cargo insurance, please feel free to contact us

About the Author: Darrell Gajadhar